On a recent trip up north to see some friends, we popped into Calf Cafe to refuel before finishing the gruelling luggage-laden trek to the accommodation (we found out afterwards that our place was less than five minutes away, but I regret nothing). It was an interesting experience – on first sight it is a small, humble establishment with five or six tables. The place is mostly decked out in wood, and there is a very intimate feel to it all.

On second sight, however, you start to notice the eyes.

On all of the walls are pictures of animals, from intimate photographs taken from a sanctuary to some super-imposing large print photos of glaring sheep, like an aggressively-judgey Amish Harvester. The place is decked out in merchandise and posters that assert a solid ‘pro-vegan’ stance that comes off as a little belligerent.

I don’t mean to make Calf Cafe sound like a den of vegan extremists, because as I will go on to explain in a second, it may well be my favourite place to eat in the UK thus far. I simply want to put across that it is a little shocking on entering, and it does take a little getting used to.

Once we sat down, we took a look at the menu, and instantly that judgey sheep seemed more than worth it. With a selection of paninis, sandwiches, burgers, hot dogs, sausage, bacon, chicken nuggets and more, all vegan, we were impressed, and all more than reasonably priced at £7ish for a main meal at the top end.

The staff were lovely, and although the food took quite a long time to come out of the kitchen, it was more than worth it for both the quality of the food, but also the pleasant atmosphere inside. A steady stream of customers denote a popularity with the local area, and with profits going to the attached sanctuary (more on that in a sec) it’s very comforting to see.

My personal favourite when it comes to food was the cheeseburger – a staple of my former diet and something I have yet to see satisfyingly replicated in a non-murdery way. Until now.

The ‘meat’ was tender and flavourful, but not enough so that it clashed with the cheese, which had a sharp tang to it. This, with the mushrooms, added a satisfying texture and all the constituent parts came together to make a very pleasing meal. The chips were a little more of a disappointment; thick-cut and rustic with plenty of potential, but the takeaway container they came in (we ate this meal on the move) served to make the chips soggy and underwhelming. In retrospect, I would like to have tried them in the cafe as they looked great on the plate – this is likely just a container issue. Regardless, a damned fine meal.

We also had a crack at the desserts – home-made vegan cakes are proudly boasted by the counter. I had a raspberry sundae, and Sam had the hot fudge cake with cream. I’m not even going to describe these – just look at the pictures, and that knee-jerk reaction your salivary glands have should tell you everything. 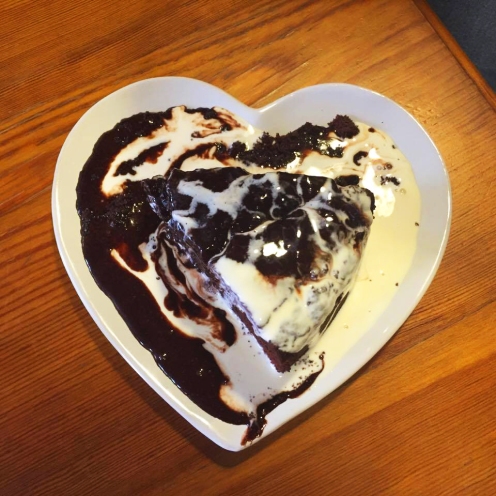 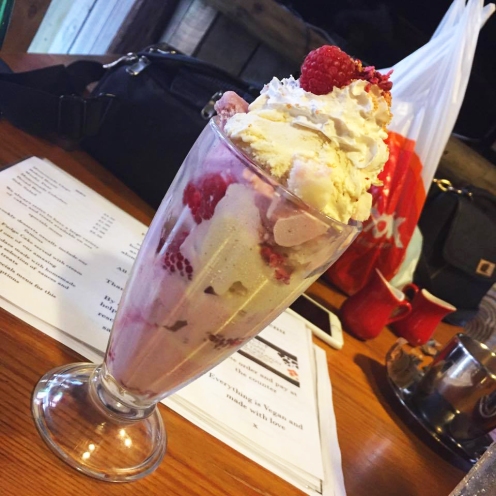 So, the food is great and the service is fantastic – what’s the catch? Well, Calf Cafe isn’t open all the time. Doors open for the summer, and then close once tourist season passes. The cafe raises funds for Calf Sanctuary, an entirely self-funded endeavour where the owners provide a home to animals that survive the meat and dairy industry, and look after them.

Suddenly, it’s easy to see where all the aggressive merchandising and slogans come from – these are people who spend their lives with the victims of a system that most people don’t give a second thought to. We’ve seen time and time again how animal activists and vegans can suffer socially as their patience and tolerance for the industrial system we subscribe to as a culture breaks down. It’s easy to feel on the defensive when you walk into Calf Cafe, but behind the scenes there is a difficult task being undertaken by a small group of people.

So, if you are in the area, absolutely drop in and grab a bite to eat. The food is amazing. If not, take a look at the website. Like them on Facebook and take a look at their YouTube channel. They even have an online shop with a huge range of clothing and sweets and all sorts to take a look at. Check them out, say hi, and let them know that you appreciate what they’re doing, because it’s not an easy task.